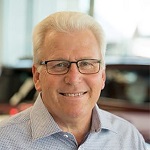 Steve is part of our New Zealand-based team. He has been in the automotive industry for 27 years in a range of roles from grooming cars, selling used imported vehicles from Japan and in the last 15 years selling new vehicles for Toyota New Zealand.

Steve embraced the training provided by Automotivaters and put this knowledge to the test first hand. During the years with Toyota, Steve has won the No: 1 New Vehicle Salesman competition three times consecutively over a total of 8 years!
Steve has studied and passed the fleet sales training and is also proficient in finance and insurance.
His focus in sales has always been about the customer, making sure they are well looked after and enjoy the experience.
This started when he first went into sales, as part of the family business selling, servicing and delivering home appliances.
Steve, and his wife Judy, of nearly 39 years, have just relocated to a home in Central Taranaki closest to the mountain which Steve climbed in 2012, after being told he would never make it due to hip problems! No problem!
Steve and Judy have 3 married daughters and 7 grandchildren, which they adore.
Being part of the team with Automotivaters has been a passion of Steve’s, as he has a heart to help sales people, both individuals and teams, to reach their potential and enjoy their career in sales.
Like Mark, he loves to see the lights go on in someone’s world, when they are able to apply knowledge and a technique that works and helps them, to help others.